Saved Searches Advanced Search
Schedule a pickup appointment: menlopark.org/curbsidepickup
All materials returned are quarantined 72 hours. At check-in we backdate all items to prevent any accrual of fees due to our material handling time frame.
Quotation 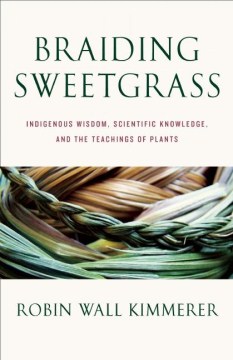 “When a language dies, so much more than words are lost. Language is the dwelling place of ideas that do not exist anywhere else. It is a prism through which to see the world. Tom says that even words as basic as numbers are imbued with layers of meaning. The numbers we use to count plants in the sweetgrass meadow also recall the Creation Story. Én:ska—one. This word invokes the fall of Skywoman from the world above. All alone, én:ska, she fell toward the earth. But she was not alone, for in her womb a second life was growing. Tékeni—there were two. Skywoman gave birth to a daughter, who bore twin sons and so then there were three— áhsen. Every time the Haudenosaunee count to three in their own language, they reaffirm their bond to Creation.”