Saved Searches Advanced Search
Menlo Park Main and Belle Haven libraries remain closed to the public, "curbside pickup" service is available see https://menlopark.org/1686/Curbside-pickup.
All materials returned are quarantined 72 hours. At check-in we backdate all items to prevent any accrual of fees due to our material handling time frame.
Print 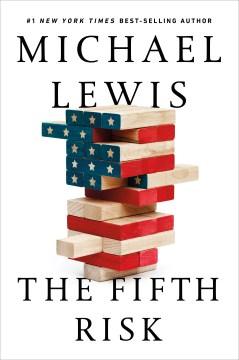 The New York Times Bestseller, with a new afterword

Michael Lewis&;s brilliant narrative of the Trump administration&;s botched presidential transition takes us into the engine rooms of a government under attack by its leaders through willful ignorance and greed. The government manages a vast array of critical services that keep us safe and underpin our lives from ensuring the safety of our food and drugs and predicting extreme weather events to tracking and locating black market uranium before the terrorists do. The Fifth Risk masterfully and vividly unspools the consequences if the people given control over our government have no idea how it works.

The government manages a vast array of critical services that keep us safe and underpin our lives. The Fifth Risk masterfully and vividly unspools the consequences of the Trump administration's presidential transition, taking us into the consequences when the people given control over our governm... Read More »

Some content below may have been reported by users for containing spoilers or offensive content. Learn More

Please do not tag as offensive any view because it differs or offers a conservative perspective.
We can disagree with civility
now I am dying to read this book!

I thought this book was a little unfocused. I realize that the author probably began writing this in the early days of the Trump administration when we could only speculate on the implications of a poor transition and and misinformation about the civil service, but to me that means he should have waited until the implications became clearer. For instance, he spends a lot of time talking about the lives and passions of people working on the national weather service and natural disasters, but no time discussing specific case studies like Puerto Rico. He mentions the administration's failure to appoint a candidate to head the Transportation Security Administration but not how this could have contributed to the botched conception and roll out of the travel ban.

The result is the book reads more like a love letter to the civil service than an analysis of the failings of the Trump administration.

However, the love letter itself is still important reading for people who don't think the civil service contributes anything. Also, the book does speculate on some of the implications of limiting data access and appointing directors with conflicts of interest, and this is also worth reading.

Prescient idea that only a pandemic could turn Americans against Trump.

Great book. Very enjoyable read and I learned something new.

Most commentators are focused on what the book says about the Trump administration, but it also takes to task other administrations and the government as a whole. The book is about risks to the country caused by incompetence in various areas by various entities. There's no doubt it is a good book, and it does have plenty to say about Trump's administration, but that's not the whole picture.

An easy and captivating read. It offers a welcome description of the importance of many federal government institutions, and how society benefits from their unsung dedication and their application of science to the critical data that they collect. It is also a truly sad revelation of the horrible depth of ignorance and greed that is being let loose by the current US administration against them, to exchange that social benefit for the personal enrichment of a few. One can only hope that these government institutions are robust enough to survive this onslaught and that truth will prevail in the end.

Slight, scary argument for the importance of “basic competence” in government, and its complete lack in the current incarnation (Trump White House).

The author of "Moneyball" takes a close look at the "transition" (or lack thereof) between the Obama administration and the clown show that followed. Specifically in three crucial, but mostly misunderstood US government agencies (Energy, Agriculture, and Commerce) and how they were impacted. (hint, badly, very badly). So many dedicated and committed government employees were tossed aside, and their knowledge ignored. It will take years (if not decades) to recover that. The last quarter of the book focuses on impacts on the National Weather Service, which is truly sand, and potentially dangerous.
Great summation: "It (the rift) was between the people in it for the mission, and people in it for the money".
Some of the commenters above clearly haven't read the book, and their comments should be removed. Go yell on twitter.

Tagged as Offensive (Hide) (Show)
a
AQUILEA777 Mar 20, 2019
This content is tagged as offensive and is hidden.

DEFY THE COWARDLY FREE-SPEECH HATERS! TILT YOUR SCREEN SLIGHTLY TO READ THIS.
I have seen only reviews and the Amazon sample of this book, but its premise reeks of hypocrisy. DEMS DO NOT WANT TRUMP TO GOVERN EFFECTIVELY FOR THE GOOD OF THE COUNTRY. They want to make it IMPOSSIBLE for him to govern. They want him to fail, and the country to suffer, so they can denounce him in books like this.
--- The book seems to be a string of anecdotes without sources. Blaming Trump for unprofessionalism, author Lewis holds himself to no standard at all. If a Trump insider said something off the record, Lewis should qualify it so, not state it as an absolute fact.
--- Detractors heaped scorn on Trump from the moment he announced his run. They said he was merely a trickster playing a cruel joke to boost his commercial endeavors. They insisted he had no chance, even after easily winning the nomination. Hoping to depress Republican turn-out, they guarantied Trump would be trounced by Hillary. They warned he might try to disrupt her presidency. They piously hoped his supporters would accept defeat and unite around Our First Woman President. They kept up this charade well into election night coverage. Bear all this in mind when you read pronouncements from them now.
--- When Trump won, some Media Liberals wept openly. Others denounced straight White male voters ("deplorables"), dropping all pretense of neutrality. The Web has countless collections of clips of their foolishness.
--- Author Lewis takes up the baton of hypocrisy at that point, blaming Trump for not having prepared for victory. This is grossly unfair. Very late on election night, Trump appeared before the cheering throng and spoke easily and graciously. Hillary, so much more qualified, so much better suited by temperament, failed to appear at all. She couldn't muster the will power to do it. Probably she was drunk. Perhaps she was screaming and throwing things, as she sometimes did when out of control.
--- Lewis attacks Trump's transition performance. Remember what Dems were doing at that point. Against their recent posturing for unity, they denied Trump's presidential legitimacy: "Not my president!", "Resist!", "Russia/FBI conspiracy!" They rioted, vandalized, beat and shot Republicans. They violently took over campuses to suppress free speech. They required recounts (which only increased Trump's lead), and sought to corrupt the Electors. They demanded the Mueller witch hunt be established as an arm of government superior to the Executive. Liberal judges issued untenable orders to delay Trump's program.
--- Lewis blames Trump for not standing in awe of bureaucrats. But the majority of voters in 30 states approved Trump's thesis that Government is strangling in agencies and regulations, keeping core problems from being solved.
--- Friendship with Russia should be the first presidential goal lest the nation suddenly become a smoldering radioactive heap. Trump wanted such friendship, but Dems have made it impossible. They prefer a new Cold War with nuclear brinkmanship to acceptance of electoral defeat.
--- Backed by hypocrites like Lewis, House Dems have subpoenaed vast numbers of records on Trump officials without any pretext at all, just to frighten and paralyze the Administration. Cf Mueller's nighttime Gestapo raid on elderly Roger Stone and wife, designed to terrorize Trump officials.
--- Bill Clinton began his presidency by lawlessly ransacking hundreds of confidential FBI files on Republicans. How upset was Lewis over that? How do the Trump-hating commenters feel about it? Is crime OK for Dem leaders?
--- After winning, Trump said he did not wish to prosecute Hillary's email transgressions because "the Clintons have suffered enough." Dems want no such reconciliation. Their shining ideal is to make people hate Trump. In the coming primary debates, each of the 2020 Dem hopefuls will claim, as her chief qualification, that she hates Trump more.

Every American should read this to understand what their government does for them with their tax dollars to keep them safe. It is very informative. Trump won't carry out his responsibilities so many of us will not enjoy these important services that we are entitled to. Funds are being slashed for these very services.

The list of things that might go wrong inside the DOE was endless. The driver of a heavily armed unit assigned to move plutonium around the country was pulled over, on the job, for drunk driving. An 82 year old nun cut through the perimeter fence of a facility in Tennessee that housed weapons-grade nuclear material. A medical facility ordered a speck of plutonium for research, and a weapons lab clerk misplaced a decimal point and FedExed the researchers a chunk of the stuff so big it should have been under armed guard---whereupon horrified medical researchers tried to FedEx it back. pg 56

Since Perry was confirmed, his role has been ceremonial and bizarre. He pops up in distant lands and tweets in praise of this or that DOE program while his masters inside the White House create budgets to eliminate those very programs. His sporadic public communications have had in them something of the shell-shocked grandmother trying to preside over a pleasant family Thanksgiving dinner while pretending that her blind-drunk husband isn't standing naked on the dining room table waving the carving knife over his head. pg 48