Saved Searches Advanced Search
Schedule a pickup appointment: menlopark.org/curbsidepickup
All materials returned are quarantined 72 hours. At check-in we backdate all items to prevent any accrual of fees due to our material handling time frame.
Print 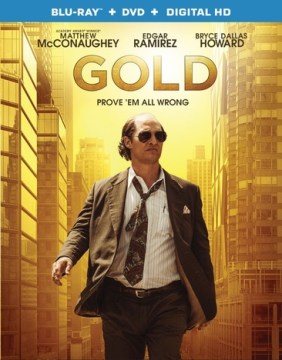 I am surprised by polarization of comments. For each their own. It's a solid movie. Funny though how it was news in the days and now it's norm.

I can choose never to watch any film associated with the Weinstein Company. Here he is hiding behind the company TWC Dimension. I so choose!! #metoo Kristi & Abby Tabby

Good movie, based on the real life BreX scam of 1990s. Those saying McConaughey's portrayal is too swarmy, are missing the point, he's 'supposed' to be. The actual scam involved more people than this movie portrays, sadly not depicted in this story, probably to not confuse the typical movie audience.

This film very loosely represents a gold mining company out if the 1990's, named Bre-X. The home office was in a basement in Calgary, Canada. The company that was brought in to assess the gold in the ground, where the mine was, in Indonesia, was none other than Freeport-McMoran. It was all a scam. I looked the facts up on Wikipedia. It is very interesting, and shows the amount of greed that can take over in a speculative, exploratory mining project. The story is true as far as the scam. Bre-X was trading on NYSE. Freeport asked, "Where's the gold?" Even the Indonesian government was involved in the money-grabbing.
What I love about Matthew McConaughey is his ability to portray these desperate characters instilled with tremendous drive to succeed at any cost. And he believes it, hence the audience sees a person pushed to the maximum limits. He is so good. Michael Acosta is a great balance, and the relationship is very good to watch. I enjoyed the film. Parts have been changed to have a story line. But the reality of it is the great money grab. And the complete selling of the lie.

McConaughey is lousy, looks old, acts corny, comes off as a con man right away so he's a real turn off. I couldn't even watch the film in its entirety because of it being so slow, couldn't hear their low voices, didn't get across what and where the point of the movie was going. I didn't care about him or anyone else. It doesn't deserve any stars.

The main character's acting seemed exaggerate and distracting for the suspension of disbelief to work.

Better than I thought, Cons of a feather flock together.

A decent movie that begs the question "just how valid is the stock market that we call the American Casino?" - spoiler alert - nice guys finish last and bad guys get the girl -

This mysterious drama film stars an all-star cast, which allowed the movie to flourish and draw people in. However, it also lacked in many elements. The movie is about a man who is desperate for cash, and decides to seek the help of a geologist so that they can mine for gold and then sell in on Wall Street. Per usual, Matthew McConaughey had a wonderful performance that embodied his character and brought charm, wit, and rawness to the film. Where the movie lacked was in its ability to tell a story, and make you care about what happens next without being able to predict the ending. I would rate this movie 3.5/5 stars for having powerful characters, and would recommend it to those who like rags to riches tales.
@The_Reviewer of the Hamilton Public Library Teen Review Board

A pretty interesting movie. All that glitters is not gold, especially in the murky world of gold speculating.

The man that invented the hamburger was smart, Mike. The man who invented the cheeseburger, now, that's the genius. Don't ask where the meat came from. Hmm? Have you ever read Christopher Columbus' journals?
-Of course not.
In his petition to the queen of Spain, he promised the conversion to her holy faith of a great number of peoples. And he went on and mentioned God 26 times. Gold, on the other hand, he mentioned 114 times.
-Smart dago. I've been wanting to ask you something, Wells.
Fire away, Mike.
-What's the meaning of the tattoo on your arm?
Oh, it's a bird. It's from a poem I read when I was a kid. Bird with no feet... sleeps in the wind.
===
God, we work hard in this business. Sometimes for nothing. I wake up every morning. I tell myself, "I don't have to do this. I get to do this." And then it's just blue skies. Blue skies, baby.

We're mapping the underlying geology. The cores are cut into sections, and then crushed. They are then bagged and sealed. This cage is guarded 24/7. Under guard, the samples are sent down river to independent labs in Kalimantan. If a seal is broken or damaged in any way, the lab, by law, has to discard the entire sample. Every safeguard has been put in place to assure the security of the process.
===
You went looking for bauxite, and you found copper. I went looking for gold and... found a friend. That is the single hokiest thing I've ever heard in my life.
===
Back then, if you wanted to put a hole in the ground in Indonesia, you wanted Mike Acosta telling you where to dig. He's what they called a River Walker. Yeah, a real hands-on geologist. The real deal. Oxford College, MIT. His mom was Venezuelan. His dad was English.

We weren't fooled. We just didn't look.
===
What is a prospector? It's someone who believes... it's out there. Who wakes up every morning, again and again, again and again... believing it's out there. And then it's not. Right? It's not. Mm-hmm. - Mm-hmm. And he's standing on the edge of the desert, staring a... new day's sunrise right in the eye, and... and he hears that little voice, a little voice that says... "Go ahead. Keep walking." And the sun gets higher and higher, and it's shining down on him, and he's really hot, and he doesn't have any water to drink, and everybody that came with him wants to turn back, and eventually, they do turn back, and there he is. And he's all alone. With the belief... that it's out there, man. It's out there. That's a prospector.

All right, let's talk about the truth. The only truth here is, when everybody's getting rich, nobody gives a shit about the truth. Come the fxck on. All anyone had to do was look, open their eyes. Man, the- (intentionally blanked for spoilers)- There were red flags everywhere. Why did no one look? 'Cause no one wanted to fxcking know. We all wanted to believe. Me, you, fxcking everybody. Why? Because we were all making so much fxcking money, man. That's the truth. That's been going on for fxcking centuries!
===
Now, if you'll take a second look at the geo, you will see what I see. And that's money.
-Not our money.
===
So one or maybe both of them, two outsiders, took everybody on Wall Street for a ride?