Saved Searches Advanced Search
The catalog and access to databases will be unavailable at 10:00 PM on Monday, April 12th due to routine maintenance.
Schedule a pickup appointment: menlopark.org/curbsidepickup
All materials returned are quarantined 72 hours. At check-in we backdate all items to prevent any accrual of fees due to our material handling time frame.
Print 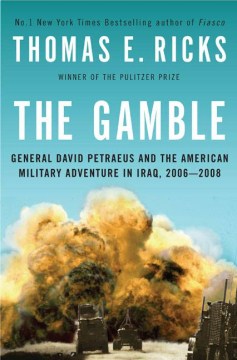 General David Petraeus and the American Military Adventure in Iraq, 2006-2008

That should read "Petraeus idolization"... but the process for some reason will not let me fix an "auto correct fail".

I wonder what Ricks would think today? American combat forces long gone (the withdrawal of same negotiated by the Bush administration before leaving office and the Iraqi National Government - who actually wanted us out of there even earlier!). I realize that while this book has a publication dare of 2009, that it was basically written in 2007 and 2008.... yet with his contacts Ricks should have been aware of the fact that we were going to be completely out of there (minus some trainers and logistics coordinators) in just a couple of years.

Some of the comments in regards Iraq's future, seen in that light, are ridiculous. His "experts" who were so reassuring completely missed on ISIS / ISIL / Islamic State (which flared into being just a couple years after the withdrawal from Iraq... which was a necessity seeing as to the democratically elected government's desires).

So Petraeus (and his slavish supporters) aside, we are once again involved in Iraq - AND also Syria now. And, with the fading of "stars" like Petraeus and McChrystal, still - as back then - fumbling through the dark, wondering at just WHAT is the long term strategy.

For a related review, see the book "Fourth Star" by Jaffe.

Ricks - who should definitely know better (see his award winning "Fiasco") - also gets caught up in the Petraeus PR machine and ultra conservative fan club braying (after all, the Surge was nothing more than a temporary purchase of some very minor breathing room to allow us to pull out in a timetable negotiated by the Iraqi National Government with the Bush Administration - with the ING wanting us out even sooner!

Like so many other militant types this author has a Petraeus civilization fixation (similar to the mythology of great generalship this sprung up relating to CSA General Robert E. Lee).

Yet Petraeus, while personally intelligent, in fact was not militarily brilliant nor particularly savvy (repeating a myth often enough does NOT make it Truth)... though he indeed was one of the Perfumed Princes who believes absolutely in the Three Ps: Power, Perks, and Privileges!

EVERYTHING that Petraeus did in his military and post military life has had one and only one agenda - to do what is right for Petraeus and his personal benefit. Entitlement is an expectation of his (which he got even in "the end"... a deal that converts multiple severe felonies demanding decades of imprisonment down to one misdemeanor that carries no jail time and allows him to maintain his oligarchic and highly wealthy post treasonous career!).

So much for his oft repeated claims of innocence. And this is the deal if the century. He should have been prosecuted for every count and once convicted, sentenced to life without parole in Leavenworth!

very thorough review of how Petraeus and his supporters turned around a tough situation in Iraq, but Ricks needed to add more about his outlook for the country given the problems that remain, perhaps the US should send Bush and Cheney there to fix the mess they created