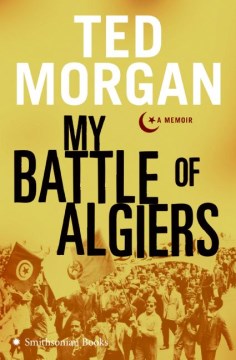 My Battle of Algiers

Baker & Taylor
Gives a personal account of a young officer's experiences during the horrors of the Algerian War in the 1950s, detailing the horrific events of the conflict, which included bombings, assassinations, and torture.

In My Battle of Algiers, an eminent historian and biographer recounts his own experiences in the savage Algerian War, an event all too reminiscent of America's present difficulties in Iraq.

Ted Morgan recalls a war that we would do well not to forget. A Yale graduate who had grown up in both France and America -- he was then known as Sanche de Gramont and was then a French citizen -- he was drafted into the French Army and served in Algeria 1956 and '57. In this memoir, Morgan relives the harrowing conflict in which every Arab was considered a terrorist -- and increasingly, many were.

As a newly minted second lieutenant, he spends months in the back country -- the bled -- where everyone, including himself, becomes involved in unimaginable barbarities. "You cannot fight a guerrilla war with humanitarian principles," a superior officer tells Morgan early on. He beats up and kills a prisoner who won't talk and may have been responsible for the death of a friend. He kills another man in a firefight. He sees men die in encounters too small to be recorded, ones that his fellow soldiers quickly forget. For Morgan, the memories will never go away.

Later, in Algiers, Morgan's journalistic experience -- he had spent all of four months as a reporter on the Worcester, MA, Telegram -- gets him a job writing for an official newspaper. He lives through the day-to-day struggle to put down an Arab urban insurgency, the first in modern history, with its unrelenting menu of bombings, assassinations, torture, show trials, executions, and the deliberate humiliation of prisoners. He misses death when a beach casino explodes just as he is going in for lunch. He becomes disillusioned with the war and what it is doing to his country. He is himself arrested, but not for the real offense he committed, helping a deserter to escape.

Though the events Ted Morgan describes so vividly happened nearly half a century ago in Algiers, they might as well have taken place in Baghdad today.

Baker
& Taylor
A personal account of his experiences as a young officer during the horrors of the Algerian War in the 1950s by a Pulitzer Prize-winning historian details the horrific events of the conflict, which included bombings, assassinations, torture, and other unimaginable barbarities. 25,000 first printing.

There are no comments for this title yet.

Loading...
No similar edition of this title was found at MenloPark.

Try searching for My Battle of Algiers to see if MenloPark owns related versions of the work.