Saved Searches Advanced Search
The catalog and access to databases will be unavailable at 10:00 PM on Monday, April 12th due to routine maintenance.
Schedule a pickup appointment: menlopark.org/curbsidepickup
All materials returned are quarantined 72 hours. At check-in we backdate all items to prevent any accrual of fees due to our material handling time frame. 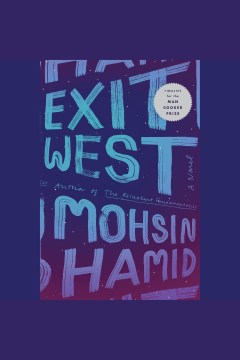 Beautiful, restrained storytelling. However, the author’s narration left something to be desired.

Fascinating, poetic book. It asks us to consider how arbitrary national boundaries are and how our lives would be different if we were forced to acknowledge this reality. There are moments that are deeply thoughtful and lyrical, and overall I found the writing style lovely and subtle. I listened to it on audiobook, and it is a shame they had the author read it himself. It is fine, but his voice lacks the range of a trained actor, and it can be a bit repetitive to listen to for long periods of time.

Two people are falling in love as the world falls apart. I'm not sure that I have anything to add to the praise this book has already received except to say I felt like it is deserved. And, crucially for listeners of the audiobook: don't be turned off by the fact the book is read by the author. I normally try to avoid author narrated books after being burned by Fahrenheit 451 (ha) but Hamid's narration is smooth and engaging.

This is anything but a typical love story, though it is a love story. It's also about globalization and migration and all of the ways humans can be ugly. Striking observations about human nature are put forth with eloquent but simple language that would alone make this book worth reading, especially for lovers of literary fiction. Moreover, it is especially fitting for these times. Book clubs should take note, as I think it would spark interesting conversations about immigration and relationships. It's also a short little book--just four-plus hours as an audiobook--so it's a quick read, but one that will stick with you.

This book was lyrical in a way that I don't often encounter in prose. Many passages were more like poems than I encounter in most stories. I loved the way Hamid dove in and out of the relationships that bound the characters, the way he defied my expectations of who these characters would be, what their backgrounds were and where they would go. There's a dash of suspended reality required of the reader, but I didn't mind a bit.

This book is so many things. On the surface, It's a story about a refugee crisis (and the ever present anti-migrant movements) in a world where doors open between countries allowing people to go to another country quickly and relatively easily. It's also a beautiful and honest story about a relationship between two young people who make the difficult decision to leave their home in search of safer places.

Hamid's writing was quiet, lovely and thoughtful. His main story was interspersed with with little snippets of other people's experiences, which helped to set the tone of the book as well as the consequences of the doors.

My one complaint is that I listened to the audio book, narrated by the author, and I found his performance to be a bit choppy (too many dramatic pauses, akin to William Shatner, which distracted from the flow of the writing).